As the digital editor for Springfield Business Journal and a lifelong resident of the internet, I’ve grown to appreciate the value of technology and public records in uncovering the truth. I first learned about public company quarterly financial reports during a business reporting class at Missouri State University, and I’ve been fascinated ever since. However, I’ve found that data that’s available online for anyone to see can still feel a bit veiled. I’m hoping to help untangle that web – nice Easter egg to this beat page title, Geoff! – and provide clarity that can be useful in your business endeavors.

Outside of work, I’m still on the internet, though I shift to television, movies and video games. My wife is my best friend, and my two kids light up my life. 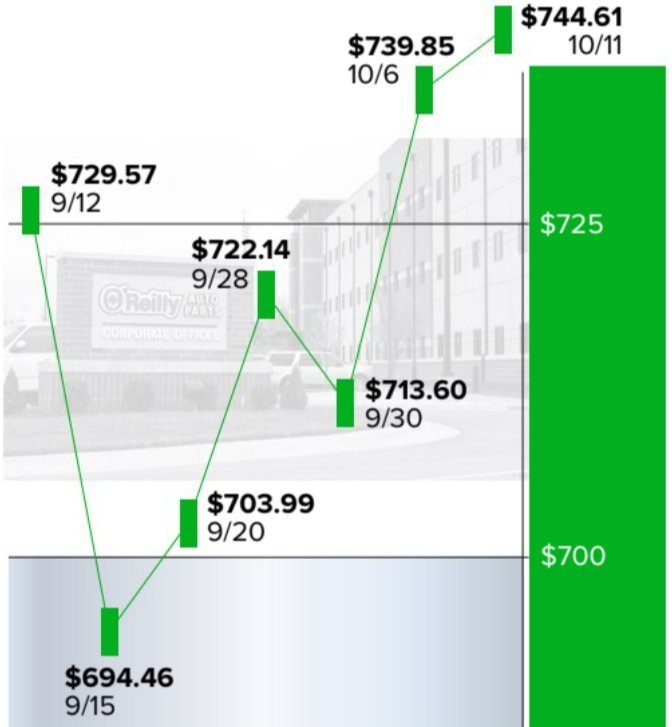 Since then, investors have observed trading on both sides of the figure, culminating with an all-time high of $750.88 set on Aug. 16, according to data on file with Yahoo Finance.

Before hitting $700, O’Reilly Automotive’s shares climbed the $600-$700 gulf in just five months. The rise to $800 has been slower, raising questions about whether that point will be hit or if roughly $700 is the new bellwether for O’Reilly Auto stock.

The timing of this writing could be interesting, as the company’s stock tends to grow in price as quarterly earnings season approaches. The release of the company’s third-quarter financial report is scheduled Oct. 26, and we’re already seeing some upward momentum. On Oct. 11, ORLY stock crossed $740 again, the first time since the flurry of trades in August put shares at their 52-week high.

The stock, and the company’s success altogether, has had a meaningful impact on the Queen City.

As the price has grown, company executives have made millions of dollars through earned stock awards, U.S. Securities and Exchange Commission filings have shown over the years. These stock awards allow company executives to buy shares at set rates and sell them later at market prices, per SEC transaction code M. It’s proved fruitful for the O’Reilly family, and a new wave of leadership at the company stands to benefit, as well.

Several O’Reilly family members have been made millionaires by the company’s growth, and the city in turn has seen a ton of support for projects such as the O’Reilly Center for Hope, C.H. “Chub” O’Reilly Enterprise Center at Drury University and the O’Reilly Clinical Health Sciences Center at Missouri State University.

The homegrown company is now a nationwide corporation with nearly 6,000 stores in 47 states.

The $800 push for ORLY could come as soon as this month, pending investor trades leading up to and trailing the quarterly report, and given the stock’s strong recent past and the company’s ability to weather recessions because of the DIY nature of auto parts.

I’ll be right here, keeping an eye out.

Have you been keeping an eye on ORLY? Feel free to send me an email with your thoughts.

Public records provide an unfiltered look into what’s coming in Springfield. For this edition, I’m taking a look at commercial building permits currently on file with the city. Check SBJ.net for future coverage.

Cryptocurrency continues to be one of the leading topics in the technology realm.

For SBJ’s Today in Business newsletter that I write – summarizing state, national and international news – crypto is a common theme, whether that’s the recent hack of crypto exchange Binance to the tune of $570 million, a Google partnership with Coinbase or a fine imposed on Kim Kardashian for promoting a crypto asset on Instagram. There are even talks on the federal level exploring the possibility of a so-called digital dollar.

The partnership between Google and Coinbase would allow crypto payments for the former company’s cloud services. Something about the announcement caught my eye, and it looks to be a trending technology topic of interest.

“We want to make building in Web3 faster and easier, and this partnership with Coinbase helps developers get one step closer to that goal,” said Thomas Kurian, CEO of Google Cloud, in the news release announcing the deal.

What is Web3? I didn’t know either, so I did my research. At its simplest, Web3, a reference to the third generation of the web, refers to a new iteration of the web that incorporates concepts such as blockchain technologies, decentralization and token-based economics.

“We’re linking content and programs directly to each other, bypassing intermediary organizations, removing intermediaries and gaining public verifiability,” he said. “It’s really taking what bitcoin did to money and doing it to all kinds of services and applications.”

Essentially, individuals could have a lot more power on the web, rather than being forced to access the internet through services created by corporations or government entities.

It sounds a little pie in the sky, but given the Google example, it’s already happening. Corporations definitely are preparing for Web3, so it will be fascinating to see what the user experience will look like as things progress.

I’m admittedly still getting my feet beneath me on this concept, but it’s certainly something to keep a close eye on.