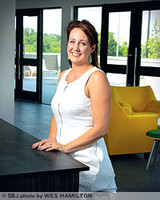 Olin Grooms, founder of Grooms Office Environments, has died at the age of 87.

His obituary at GormanScharpf.com does not list a cause of death. He died Sept. 22.

Grooms, who started Grooms Office Environments in 1977, sold the furniture and interior design business in 2015 to Audrey and Jonathan Garard, according to past reporting.

"Olin created a work environment that people did not want to leave. So many employees that started here at a young age continue to work for Grooms decades later," the post reads. "We strive every day to bring honor to him and his family name. We are proud to be called Grooms Office Environments and to carry his name and legacy forward."

Prior to starting the company, Grooms retired from the U.S. Marine Corps as a lieutenant colonel, according to the Facebook post.

From the Ground Up: Gerber Collision & Glass

Open for Business: The Sweet Deal

From the Ground Up: Flat Creek restaurant

The Digital Edition from SBJ

SBJ.net Poll
Have you left Twitter since Elon Musk's takeover?