SBJ file
OTC's 120,000-square-foot manufacturing center is highly visible at the southeast corner of the college, at Chestnut Expressway and National Avenue.

Efforts of many earn OTC Developer of the Year 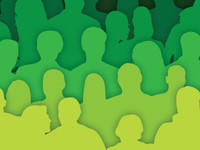 In the race to open the $40 million, 120,000-square-foot Robert W. Plaster Center for Advanced Manufacturing, faculty and staff from all over Ozarks Technical Community College pitched in.

The grand opening date had been announced, and invitations had been sent out to community members, industry partners and members of the media to come to campus at 10 a.m. Monday, Aug. 15. While the other preparations came right down to the wire, even administrators like Chancellor Hal Higdon – more typically seen in a suit and tie – donned work clothes and applied elbow grease.

“Dr. Higdon and really everybody from around the institution put together furniture, swept and mopped floors,” said Rob Rector, OTC’s vice chancellor of administrative services. “There was very short turnaround, and it wasn’t going to get done without all hands on deck.”

The final preparations were the culmination of an idea first posited by Higdon in 2015. The center was incorporated into OTC’s strategic plan five years ago, Higdon said. In 2018, OTC presented voters with a proposal for a 5-cent property tax for capital improvements, including construction of a manufacturing center, and 55% of voters agreed.

On behalf of the college, and with an expression of gratitude to voters, Rector accepted the Developer of the Year award for the Plaster Manufacturing Center project at the 38th annual Salute to Design and Construction Awards Banquet on Nov. 10.

In his remarks, Rector described Higdon as a leader whose vision brought the center to life.

Higdon said the center’s planning team visited manufacturing centers in multiple states to develop the concept that would become the PMC.

“Working with our local industries, our board of trustees and our local architects, we were able to determine what design and what features we best needed for our own unique, diverse manufacturing economy in southwest Missouri,” he said.

And “local” was an important word during the process, with Crossland Construction Co. Inc., which has a Springfield office, serving as general contractor and Dake Wells Architecture Inc. providing the design.

“We’re a local institution, and as such it’s incumbent upon us to use local,” Higdon said. “Frankly, the quality of the design and the quality of construction shows we made the right decision.”

He noted the principal architect in charge, Andrew Wells, was trained “right across our parking lot at Drury.”

Higdon said the team’s site visits revealed as much about what not to do as what to do. The biggest lesson came from seeing a beautiful facility that wasn’t very functional.

“It was form over function,” he said. “We were very clear with our architect that it’s function over form. We wanted a beautiful facility, but it had to first and foremost be a working building.”

That meant thinking about adequate storage, durability, flexible spaces and the proper technology, he said.

Rector said a standout feature of the PMC is a catwalk allowing visitors to walk above the manufacturing floors to see the entire scene laid out below. The view includes 15,000 square feet designated as industry partner space, where local companies can train employees, create operational processes for new equipment, and conduct research and development.

Technical training programs, including automation and robotics, cybersecurity, drafting and design, IT infrastructure, manufacturing technology, mechatronics and precision machining, are also housed in the building.

Higdon pointed to the assembly stairs as another distinctive feature. They offer casual tiered seating that can serve as a staging area for tours and visiting classes.

Higdon said the main message the building sends is that manufacturing is not what some people might believe if their vision of it was formed by movies or TV shows from decades ago.

“The message is manufacturing is clean, cool and lucrative,” he said.

According to Executive Director Robert Randolph’s remarks at its opening, the PMC is the largest and most expensive building in OTC’s history, but it came in on time and on budget.

In a video message introducing the award during the Salute to Design and Construction ceremony, Springfield Mayor Ken McClure said the benefits to the community were almost too numerous to count.

“It fits into the city priorities of economic vitality, of quality of place, and in a much different form the workforce development issues … training workers that are going to be needed,” he said.

Higdon has said the facility has the capacity to teach 1,200 students.

Juan Trujillo, project manager from Crossland Construction, predicted the PMC would affect the community in a big way.

“A lot of times you don’t get to build with the scope of work that this one had in the area,” he said. “For me, it’s a once-in-a-lifetime project.”

Matt Morrow, president and CEO of the Springfield Area Chamber of Commerce, said the project is one the community will look back on 50 years from now and recognize its “absolute transformational impact.”

“It will give us an enormous advantage – some might say an unfair advantage – as we compete with other communities and other regions for expansions and relocations of existing and new businesses,” he said.

Principal architect Wells said the hard work of OTC’s team to visit other manufacturing centers and bring back the best ideas paid off.

Representing the manufacturing community, Tom Hilmes, executive at large with SRC Holdings Corp., had high praise for the facility in the introduction to the award.

“This is the most aesthetically pleasing factory I’ve ever seen,” he said. “Those of us in manufacturing, we know it’s cool, but it’s going to show everyone else what it can be, and the aesthetics? It’s a showplace. We’re just so proud of it.”