Courtesy Greene County Jail
Pavel Samsinak is scheduled to be sentenced in May.
RELATED 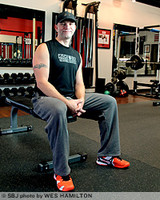 The former owner of a Springfield gym was convicted of murder by a Greene County jury.

Pavel Samsinak, 48, was found guilty by the jury of murdering his neighbor, Alice Hale, a retired elementary school janitor, according to a news release from the office of Dan Patterson, Greene County's prosecuting attorney.

Samsinak, who owned Czech Us Out LLC, was found guilty of all four charged offenses: murder in the second degree, armed criminal action, arson in the second degree and tampering with physical evidence, according to the release. The jury deliberated for around 45 minutes before returning the guilty verdicts on Feb. 4.

Evidence presented at trial indicated Samsinak beat Hale to death with a dangerous instrument after an argument about a fence the defendant was building between his vacant lot and the victim's home, according to Patterson's office. He then set her house on fire to destroy evidence and watched the residence burn from the parking lot of a nearby convenience store.

The jury heard testimony from neighbors placing Samsinak at the scene arguing with Hale, viewed surveillance video located by the Springfield Police Department and examined evidence of the victim's blood on the driver’s seat belt in Samsinak’s truck, according to the release.

The jury trial was presided over by Judge Becky Borthwick. The defendant, who is subject to a life sentence for murder in the second degree, is scheduled to be sentenced May 11, according to Patterson's office.

Samsinak moved to the United States from the Czech Republic and opened Czech Us Out in 2002 in Springfield, providing fitness and nutrition classes, according to past reporting. The release from Patterson's office indicates the gym closed in 2020.

City Beat: Galloway rezoning to be on November ballot

Branson board approves sale of former school for housing project

The Bureau of Labor Statistics reported in May the all-items inflation index surged 8.6% over the past year, the highest increase since 1981.

SBJ.net Poll
Should short-term rentals be required to pay the city of Springfield's lodging tax?